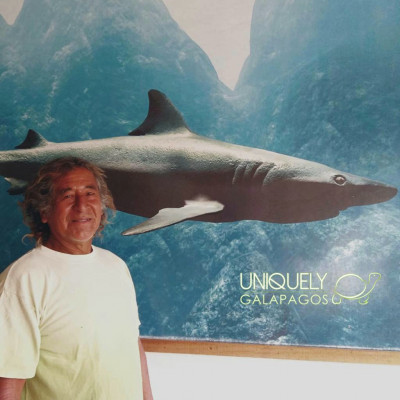 As our ‘enchanted islands’ slowly and safely welcomes back tourists after a strict lockdown, we reached out to 4 Galapagos residents either during or post lockdown to understand what makes them 'Uniquely Galapagueño’. We also discuss some of the contemporary issues shaping the Galapagos Islands and tourism here and globally in ‘the new normal’.

Over the course of 4 weeks in Blogs/Vlogs we will learn about their remarkable journeys, their connection to the island, how they have impacted life on the islands and discuss Conservation, Sustainability, Tourism, Cultural Immersion, Education, Art and Wellness.

Just like many other Galapagos residents they have shown great resilience and pragmatism to survive on the islands by evolving just like the amazing wildlife here and becoming more self-sustainable.

It was on a searing hot late March Sunday morning that I first met the super popular Sergio Bazán, then 66 years old jogging on the 5km cycle path between the Tomas de Berlanga highland suburb and Puerto Ayora town. Sergio has a charismatic smile and infectious personality and you could easily mistake him for French Polynesian with his dark skin, Pacific Island features and long wavy sun-bleached hair. Sergio was only wearing white sport shorts and a pair of blue La Coste plimsoles and not carrying his trademark surfboard with Tortuga Bay closed until June.

The journey back to town with Sergio at a social distance I might add discussing his life on the islands and views on tourism past, present and future was enthralling and certainly a highlight of my lockdown and inspired this series of blogs.

Are you a native Galapagueno?

No, I was born in Salinas, a coastal city in Ecuador popular with tourists but moved to the Galapagos Islands in 1982 and became a naturalist guide in 1986. I live in Puerto Ayora, Santa Cruz.

What is one of your earliest memories of the Galapagos?

I remember the devastation of the El Nino of 1982-3 on Santa Cruz, which was the strongest ever and the widespread flooding and the effect on the wildlife here. Back then the population of the islands was around 800 people living in Santa Cruz and life was much slower and relaxed then.

What do you enjoy most about living on the islands?

I love surfing and immersing myself in nature, these have always been my passions since I moved to the islands along with showcasing the amazing islands as a guide. Although my father was a professional footballer in Ecuador, I excelled at surfing and became a champion at this. Over the years I have had 5 dogs. Banca, Coca and Borero (rescue dog) have all died. Mona and Tuna live with me now after I rescued them in Santa Cruz. I can’t speak highly enough of the work of Dr Ben Howitt and his team at Galapagos Animal Doctors (Darwin Animal Doctors) which will be returning to the islands in early 2021.

What type of tourist visited the islands in the past?

The type of tourists that visited the Galapagos Islands between 1980 and 2000 were distinctly more selective, informed on conservation and with a sense of adventure as land tourism was unregulated. Independent tourists could still find small 8 berth experiential fishing boats to take them on unstructured tours around the island or interisland with a guide, a cook and diver. Tourism was local, sustainable with plenty of human connection.

How would you describe the islands 40 years ago?

It was a ‘paraiso’ (paradise), idyllic, more ecological and focused on conservation and the environment. The population was under 10,000 people across the four populated islands and there was zero pollution, no rubbish and no crime or illness with hardly any development. You could clearly see the Pacific Ocean from the near the bus terminal which is now the overcrowded suburb of Mirador with its economic migrants. There were a handful of small hotels like the Elizabeth, the Salinas and Jeria and a couple of small restaurants like El Rincon de Alma and one in Las Ninfas neighbourhood. I remember the fishermen bringing their catch to my house and our wives cooking it for us.

What was tourism like on the islands before the Covid 19 outbreak?

The number of tourists visiting the Galapagos Islands had grown rapidly since 2011 by more than 7% per year to almost 300,000 tourists in 2019 according to the Ministry of Tourism. I was among a number of people on the island deeply concerned about ‘over tourism’ and the negative effect it would have on the Galapagos National Park and Galapagos Marine Reserve as well as the additional pollution and rubbish caused by the tourists and locals supporting tourism. The Galapagos Islands had become more accessible due to cheaper international flights to Ecuador which created a market for budget travelers despite the Ministry of Tourism trying to raise the standards of accommodation, restaurants and tours through regulation.

What will tourism be like in the future on the islands in ‘the new normal?

Feeling safe will be tourist’s main priority. Tourism will be less congested, tourists will travel in smaller groups maybe with close friends or family, stay in smaller local guest houses and seek unique, local, responsible and sustainable activities. Almost like 40 years ago tourists will be more curious, adventure seeking and well informed on conservation looking for a less structured experience. We will see development of newer sites on the islands to create new cultural immersion experiences which will generate jobs and revenue for the local economy and avoid overcrowding at popular sites like Tortuga Bay.

Tourism returned to the islands in August, Uniquely Galapagos how is it different now to pre-Covid?

The first tourists to return to the islands were Ecuadorian tourists from the mainland buoyed by cheap domestic flights, discounted hotels and up to 65% off quality cruises. Over the past 2 months we have also seen an increase in the number of independent tourists from the US and Europe as flights to and from Ecuador open up. Tourists numbers whilst well below the average of 25,000 per month we used to have, peaked in the holiday weekend from the 30thOctober to the 3rdNovember 1175 national tourists and 228 foreign tourists visiting the island (Galapagos National Park). The Ministry of Tourism, Galapagos added that 86% of these tourists were land based which concurs with the trend of ‘slower tourism’ and feeling of safety and freedom here but larger cruise companies not yet operating has clearly contributed to this breakdown.

If you are interested in finding out about the amazing animal welfare work done on the islands, visit the Galapagos Animal Doctors website.

You can find out more about the great conservation efforts on the island by visiting the Galapagos Conservation Trust website.

Finally, if Sergio has inspired you to visit the Galapagos Islands, Uniquely Galapagos can help you plan ‘an experience as unique as you’.

About Us
Plan & Book Your Experience
FAQ`S & Policies